Tribute written by Risa Wilkerson, board chair of the Safe Routes Partnership. Click here to read tributes and memorials to Deb.

Deb was diagnosed with Acute Myeloid Leukemia in October, 2013. Despite this tremendous challenge, she remained dedicated to her vision of creating a more walkable, bikeable, and healthy world, especially for children. Even after stepping down as executive director in September, 2014 in order to focus on her health, she remained an active board member, contributing her wealth of experience, knowledge and passion.

I first met Hubsmith years ago as she was launching the Safe Routes Partnership and the nation was on the cusp of a movement to make walking and biking safe, easy and viable transportation options for children and their families. At the time, I worked at the Michigan Fitness Foundation supporting active communities and a statewide Safe Routes to School coalition.

We soon discovered that Deb and I were both cheerleaders in high school. We laughed about how we were still cheerleading, just in different venues and for the greater good. Deb amazed me with her endless energy. She became animated whenever she talked about opportunities for partnerships, new ways to accomplish difficult goals and the importance of this work. She believed all things are possible and that envisioning the outcome you desire increases the probability that it will happen. She usually achieved what she envisioned, so she must have been right.

Many know that the bicycle became Deb’s primary mode of transportation when she vowed not to replace her car after it was totaled in a crash. The bicycle is such a fitting symbol for Deb. It takes human power to move. Every inch of progress is made only by your own energy and determination. And yet the bicycle alone won’t get you there. Without others investing in the right infrastructure, teaching safe riding habits, manufacturing helmets and panniers, it wouldn’t be a viable option for daily transportation. 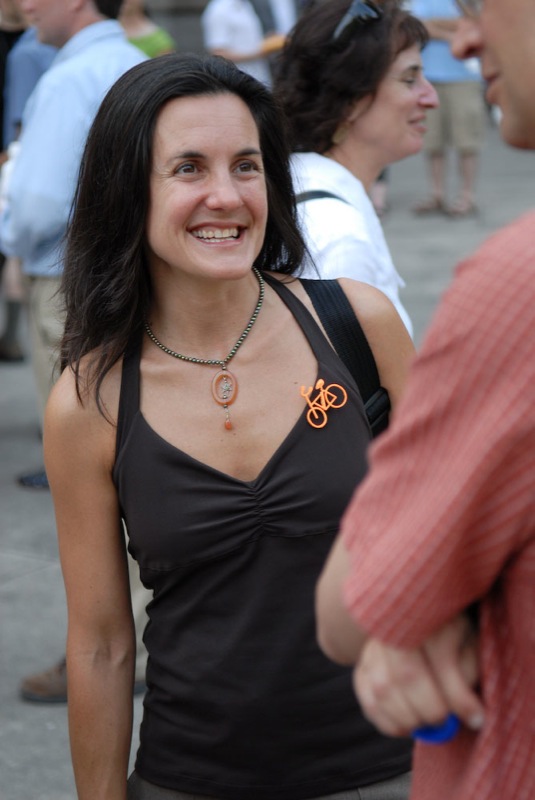 And that was Deb. Completely self-motivated and driven, yet with a big vision which required collaboration. That’s why she included so many others in conversation as she developed the Safe Routes Partnership, launched it with a steering committee of about 20 advocates, and created an affiliate model for the organization. Deb continuously sought to connect with others who shared the value of a healthier country (or convinced them of this value) by creating environments where being active could be the norm—for getting to school, work or anywhere, as well as for recreation.

And she was the ultimate role model in that regard. She worked for two decades at local, regional, state and national levels, starting first in Marin County, California. She co-led the development of her state’s award-winning Safe Routes to School pilot program and helped create the nation’s first statewide program in California. Deb often credited her meeting with Congressman Oberstar, then the ranking member of the House Transportation and Infrastructure Committee, as a tipping point for her career.

This is how Deb described that meeting. “In March 2000, Mr. Oberstar challenged the crowd at a bike industry event to ‘change the habits of an entire generation’ and reverse the rise in childhood obesity and the decline in kids walking and bicycling to schools. The next month I flew to Washington, DC to talk further with Mr. Oberstar about his plans and to volunteer my help. Mr. Oberstar and I hit it off from the beginning and he ‘deputized’ me as the person to carry out a federal pilot Safe Routes to School program in Marin County, CA. He urged me to ‘do it right’ as he planned to take the data from our local project and demand a national Safe Routes to School program be authorized by Congress.”

And this part is so Deb:  “There was no way I was going to let Mr. Oberstar down. I put my best and most creative energy into the project and organized the most talented team I could find to ensure the success of the Marin Safe Routes to School federal pilot program. We were successful locally with getting more kids active (with no increase in injuries), and health journal articles were written about the success, creating demand throughout the nation.” 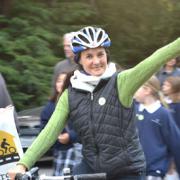 Meanwhile, Deb had been fielding many inquiries about her work in Marin County and recognized the need for national leadership. So, in anticipation of the federal funding, she founded the Safe Routes Partnership in 2005. She started it as a part-time executive director with support from Bikes Belong Foundation (now PeopleForBikes), which hosted the Safe Routes Partnership as a program of their non-profit organization.

Tim Blumenthal, President of PeopleForBikes, embraced and supported Deb’s vision: "I remember our very first discussion about the U.S. potential of Safe Routes to School. Deb's energy, expertise and commitment was so impressive. Our appreciation--often our awe--of her many talents only grew from there."

With their administrative and strategic support, Deb was able to nurture the development of the Safe Routes Partnership from an all-volunteer organization to a powerful coalition with more than 750 partners, a $3 million annual budget and nearly 30 staff dispersed throughout the country. In 2013, her final year as director, Deb helped transition the Safe Routes Partnership into becoming its own independent 501(c)3, a natural step given the organization’s extraordinary growth.

During her tenure as director, Deb testified before congressional committees about the benefits of Safe Routes to School, served as an inspiring keynote speaker at numerous events, and co-led the California advocacy campaign and coalition that secured the new $130 million per year Active Transportation Program. In 2012, the Centers for Disease Control and Prevention recognized Deb's passionate leadership and the exemplary work of the Safe Routes Partnership with a Pioneering Innovation Award as a game changer in advancing policies and strategies to prevent and control obesity. Among other awards, Active Living Research honored Deb with the 2015 Translating Research to Policy Award, and the Associate of Pedestrian and Bicycle Professionals gave her their 2015 Lifetime Achievement Award.

I’ve had the pleasure of serving in a voluntary leadership capacity for the Safe Routes Partnership since the beginning, first on the Steering Committee and more recently as Board Chair. It was an honor to learn with and from Deb during that time. She accomplished more in her short life than many do in twice that time. She often said that she never had children of her own, choosing instead to dedicate her life to making our world a healthier place and believing she could do that better with laser-like focus. 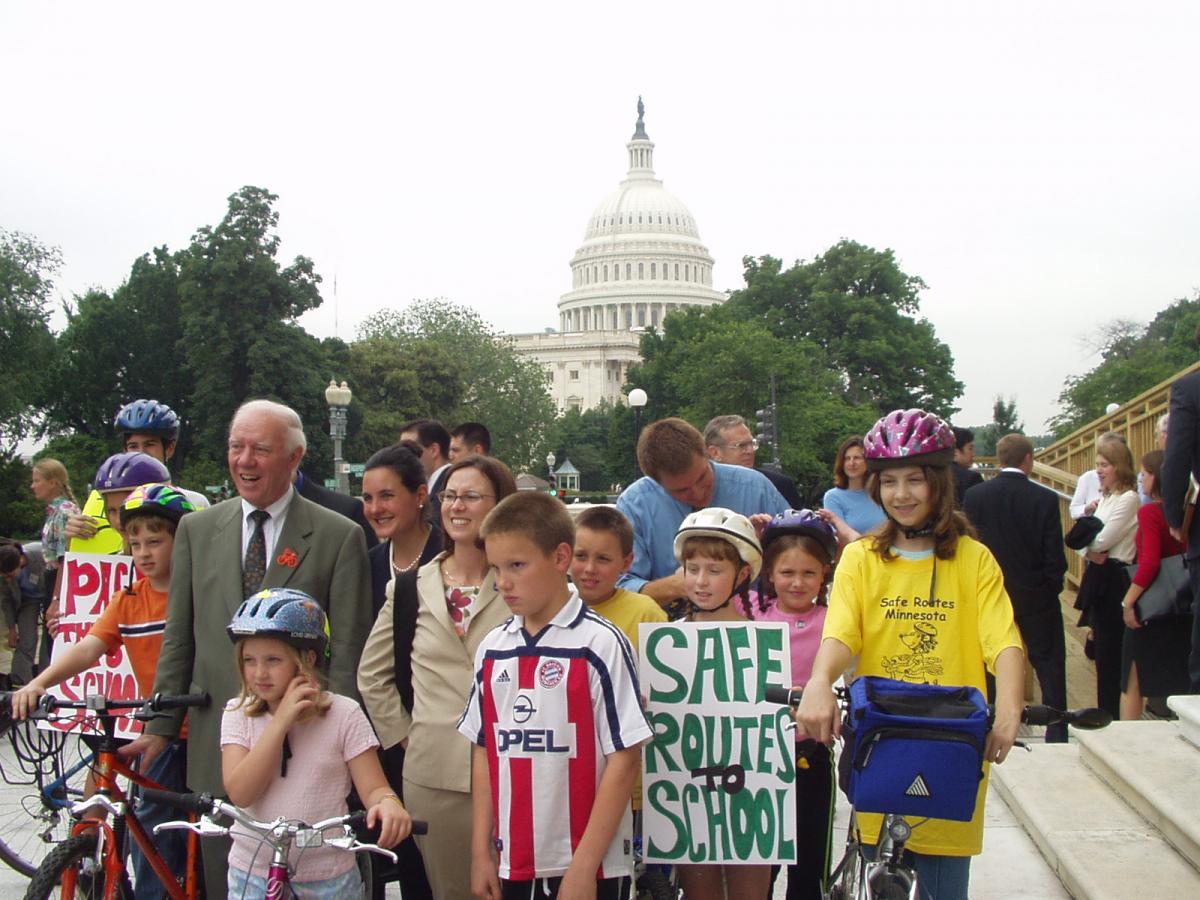 And the results speak for themselves. Congressman Oberstar used to say “We’re changing the habits of an entire generation.” I believe Deb’s mark on the world will improve life for countless generations. More than 15,000 schools have received federal funding for this purpose. However, Safe Routes to School funding is just one small part of a larger movement. Communities are creating more walkable, bikeable environments beyond a two-mile school radius because Safe Routes to School inspired them to think bigger. Organizations are now using the term “Safe Routes to Everywhere” and are thinking about different destinations with this lens. Complete Streets and shared-use are expanding our perspective about active communities and ensuring that physical activity can be an easy habit to incorporate into our lives, one that brings us closer as neighbors and friends.

Colleague Leslie Meehan, Associate Director of Primary Prevention at the Tennessee Department of Health said, “Deb was an incredible combination of passion, energy, intellect and brilliance. There would be no Safe Routes to School in the U.S. without Deb. There will never be another one like her."

Long-time partner Wendy Landman, Executive Director of WalkBoston, said, “Deb was truly an inspirational leader for the Safe Routes to School movement, and for the broader walking and biking communities. I will always remember how she lit up the room with her excitement at the first organizing meeting for the Safe Routes Partnership. I hope we can each help keep that light alive by giving all children safe places to walk and bike.”

Andy Clarke, former executive director of the League of American Bicyclists, worked with Deb for almost 20 years. “I will always cherish her focus, indomitable spirit, enthusiasm and the true sense of partnership with which she worked. (The Safe Routes Partnership) perfectly embodies all those characteristics, and the time I spent on the steering committee was a lesson to me in how every good partnership should be run.”

Many leaders in the movement paid tribute to Deb earlier this year in a video produced by Mia Birk’s team at Alta Planning + Design that was shown at the National Bike Summit, which she had attended every year.

And she touched so many others. In recent weeks, Deb heard from hundreds of you when Carter Headrick, Director of State and Local Obesity Policy at the American Heart Association, created an email campaign encouraging people to send Deb notes of encouragement. Responses flooded in. She heard about your personal stories and how she inspired your work and your commitment to health for yourself and your family. You described the lasting impression she made on you and the deep commitment your community has made to safer, active streets because of her leadership. Over and over she was told, “You’re my hero.”

As we mourn Deb’s passing, let us also celebrate the legacy of her life. And, more than that, let us mirror her passionate and collaborative spirit to keep the momentum going; each of us doing our part to improve our neighborhood, city, county, state, and nation until ALL children are able to be healthy and active, every day, for the rest of their lives. As Deb responded to the challenge Mr. Oberstar created, let’s also say, “There is no way I am going to let Deb Hubsmith down.” Let’s put our best and most creative energy into making Safe Routes to School, and active communities for all, a success.

In a final statement to the Safe Routes Partnership’s staff and board members, Deb said, “I have so much gratitude for all of you. Thank you for growing and diversifying our movement for healthy kids, streets and communities.”

Today, and always, we say the same to her.