The Portland, Oregon region, in many regards, is ahead of the curve when it comes to active transportation. The “Bike Bill” (ORS 366.514), passed more than 40 years ago by the Oregon Legislature in 1971, requires the inclusion of facilities for pedestrians and bicyclists wherever a road, street or highway is built or rebuilt. It requires the state transportation department, cities and counties to spend “reasonable” amounts of their share of the state highway fund for pedestrians and bicyclists on facilities located within the right-of-way of public roads, streets or highways open to motor vehicle traffic.

Oregon has benefitted from this progressive law, and as a result many positive changes for bicycling and walking have been realized across the state. Cities such as Eugene have embraced bicycle and pedestrian planning and have robust Safe Routes to Schools programs despite funding cuts at the federal level. The City of Portland has made a commitment to active transportation planning and implementation, including the nationally recognized Neighborhood Greenways and Safe Routes to School programs. This long-term commitment has led to innovative ways to fund the Safe Routes to School program in Portland: a portion of traffic fines is allocated to the education and encouragement part of Safe Routes to School programming. Recent reports indicate the return on investment is well worth the effort to build and fund bicycle and pedestrian projects, with K-8 rates of walking and bicycling to school in Portland (41 percent) more than double the national average (17.7 percent) when measured in 2012-2013. 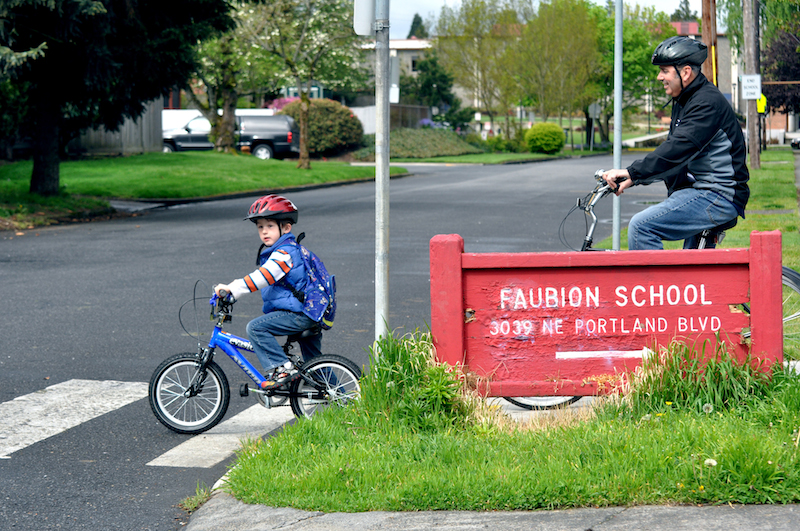 Nevertheless, the commitment to active transportation is not consistent across jurisdictions, and many people recognize that the varying contributions do not advance active transportation equitably in the region. If we want to see a noticeable difference in health, safety, air quality and how successfully people are able to get around on our regional walking and bicycling networks, it is not time to sit back and rest. Nowhere is this clearer than in East Portland, where lack of sidewalks and poor crossing opportunities have resulted in six fatalities in the past three months, something that has rightly been called an epidemic.

Regionally, 18 percent of trips are made by walking and bicycling, only half of the 36 percent projected as the Active Transportation Plan (ATP) target. Yet, 43 percent of car trips are less than three miles and 15 percent are less than one mile – trip distances that are easily replaced by active transportation if the appropriate investments are made to put complete and safe pedestrian and bicycling networks in place.

Metro, the metropolitan planning organization (MPO) for the greater Portland metro area, representing approximately 1.5 million residents, realizes that planning for “transportation” regionally is not enough. During the 2010 Regional Transportation Plan (RTP) update, a question arose – was the current level of investment in the regional trails system adequate, since it would take nearly 200 years to complete? Pursuit of an answer to that question led to a need to look at the region’s active transportation planning and investment in general, and thus the planning for a regional Active Transportation Plan (ATP) began. Although other MPOs around the country have long-range plans that include active transportation components, Metro’s regional ATP is the first of its kind in the nation, and may set the stage for other MPOs to prioritize active transportation policies, projects and funding.

Since October 2013, a regional and diverse work group of staff from jurisdictions and agencies, advocates and other stakeholders, including the Safe Routes Partnership, has provided input to the ATP. A draft ATP has been developed and is currently being refined with community stakeholder input; the public review draft of the plan will be available for public comment and input in Spring 2014.

Importantly, the ATP looks at the issue of equity around the region – that is, does the transportation system equitably serve all citizens in the Metro region, regardless of how they get around? In regional planning across the nation, and no less in the Portland Metro region, there is a need for increased infrastructure and policy to support active transportation – for those who make the choice to travel actively, but especially for those who don’t have a choice. To be sure, active transportation networks, especially when implemented in a seamless and regional manner, will address many issues of transportation equity that we struggle with today:

The ATP will be a stand-alone plan, and will complement the RTP, providing new pedestrian and bicycle maps, and updating and strengthening pedestrian and bicycle policies in the 2014 update of the RTP. This regional vision for active transportation will assist municipalities across the region to implement their own planned walking and bicycling projects. A strong ATP will help craft policy and direct funding for active transportation projects in the tri-county region, and will knit together existing walking and bicycling plans and projects from jurisdictions within the region. The effort will create a regional network of pedestrian and bicycle investments that can increase access to public transit and destinations such as schools, improve public health, help reach climate goals, increase energy independence, and create walkable and bikeable neighborhoods.