Transportation, Goods Movement and Environmental Justice in the Inland Empire 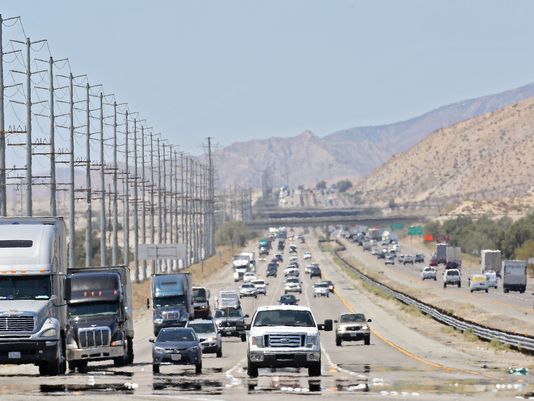 The Safe Routes Partnership works on regional policy in several jurisdictions around the country, including in Southern California. Two of the counties we cover, Riverside and San Bernardino, known as the Inland Empire, have been subject of concern for many environmental and equity advocates. The California Environmental Protection Agency has identified both Riverside and San Bernardino Counties as having high amounts of pollution and high levels of low-income people. In addition, there are a lack of transit and active transportation options in the counties.  Compounding these issues, the region has seen many concerning land use planning decisions such as a dramatic increase of mega-warehouse logistic centers, contributing to its placement as one of the top 25 most polluted areas in the country. Close to 40 percent of the nation’s consumer goods travel through the Inland Empire and sit in warehouses before they are trucked out to other locations.  The booming goods movement industry means that Inland Empire residents are exposed to high levels of air pollution, traffic safety concerns from truck traffic, and poor land use planning.

On June 7th, the Safe Routes Partnership participated in a meeting in the Inland Empire with the California Transportation Commission’s Executive Director Susan Bransen and Deputy Director of Transportation Finance Eric Thronson to discuss environmental justice and equity issues. The meeting was convened by Center for Community Action and Environmental Justice, and several other area advocacy organizations joined as well, including Inland Empire Biking Alliance, Earth Justice, Policy Link as well as Leadership Council for Justice and Accountability.

At the June 7th meeting with CTC staff, much of the discussion was focused on the recent passage of California Senate Bill 1, which will pour significant transportation dollars, including planning, into communities throughout California. However, the bill had a controversial provision added at the last minute which exempts the trucking industryfrom complying with a requirement to retire or replace polluting diesel trucks. Advocates discussed how exactly the SB 1 provision hurts Inland Empire communities, where more warehouses are popping up all over the region, often near schools and affordable housing units, meaning truck pollution affects large numbers of people.

In the end, the biggest recommendation from advocates included a call for inter-agency coordination, transparency and accountability to successfully accomplish California’s ambitious Climate Change and Greenhouse Gas Reduction goals–without creating an even greater disproportionate impact on low-income communities like Inland Empire.

The Southern California Team of the Safe Routes Partnership is proud to support leaders of the equity and environmental justice movement across the state and especially within the Inland Empire. We believe that all children and families should live in places that are toxin-free and are healthy places to live, work, walk and bike. For more information on our environmental justice work and why we believe safe routes to school should uphold environmental justice principles to protect disadvantaged communities, please read our local case study.