Did you know that the late Apple innovator and CEO Steve Jobs' dream was for his son to ride his bike to work as a doctor at Stanford? Jobs lived with his family in Palo Alto, home of the first bicycle boulevard, where more than half of Palo Alto’s neighborhood elementary school students walk, roll, carpool or take public transit to school, and almost half of all middle and high school students bicycle. For parents like Jobs, and for many Safe Routes to School visionaries, active commuting is part our shared dream to ‘ride a bike and smile more.’

A team of visionary parents, including Kathy Durham, were determined to reverse this trend. They helped produce a white paper that drew the attention of the city and school district to growing safety problems along the school commute. Rather than give in to pressure to drive their kids, “we encouraged them to create a traffic safety education program and strengthen school-based engineering and enforcement traffic calming measures,” Kathy explains, “but no one at the time had any idea of the city-wide transformation that would unfold.” 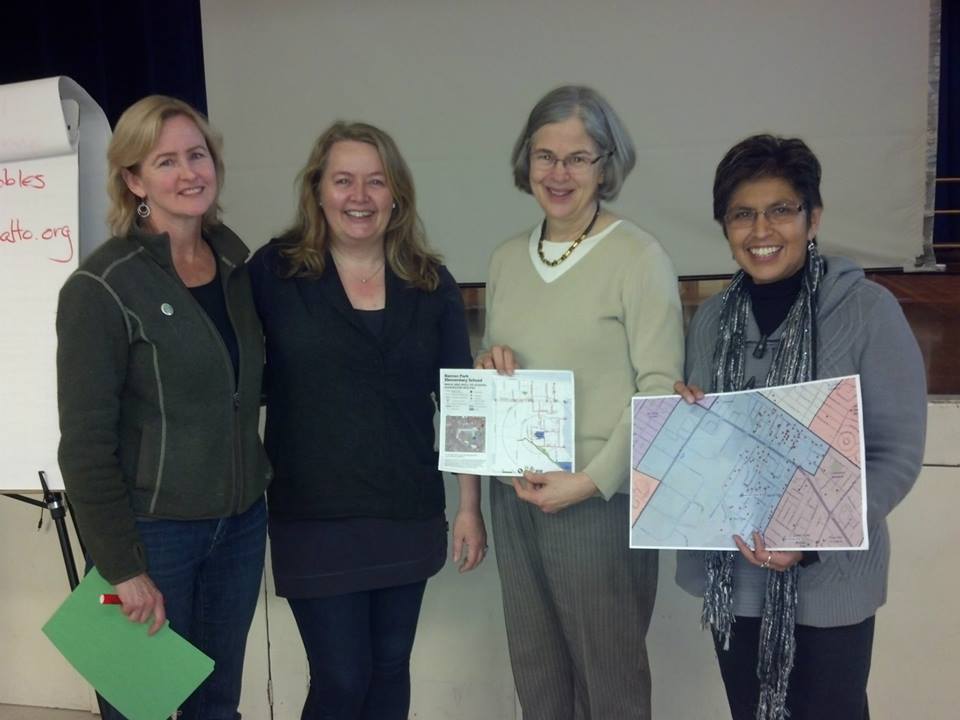 Deb Hubsmith was often fond of suggesting that a small group of thoughtful, committed citizens could change the world and by 2003, Kathy, along with a small, dedicated group of PTA volunteers helped recruit, organize, and train an all-volunteer corps of rotating PTA “Traffic Safety Representatives” at 17 school sites. Now called Safe Routes Champions, their efforts continue to this day. In conjunction with City of Palo Alto Safe Routes to School Staff, as well as support from PAUSD, these representatives have formed the backbone of Palo Alto’s local Safe Routes to School Partnership between the Palo Alto Council of PTAs, the City of Palo Alto, and the Palo Alto Unified School District.

Palo Alto’s PTA involvement has resulted in a dynamic Safe Routes to School program that reflects the changing goals and priorities of the parent volunteers. As Kathy’s youngest child neared graduation, she began cultivating a new PTA parent volunteer and gradually transferred leadership responsibilities to Penny Ellson, who was inspired by the vision of a community where people of any age or ability could move about freely and independently--whether or not they had a driver’s license. Penny and her husband had chosen their Palo Alto home because it was bicycling distance to his job and to local schools.

A friendship and partnership developed. Kathy went on to serve as the City of Palo Alto’s first Safe Routes to School Coordinator until her retirement in 2016, while Penny applied her background as a former teacher and marketing executive to step into her new role as Chair of the PTA Council Traffic Safety Committee.

Penny and Kathy have accomplished much and have been rewarded with a 33 percent increase in active commuting during the last 15 years. Their collaborative efforts began by securing the endorsement of the Safe Routes to School Partnership Consensus Statement, which formally kicked off the local partnership in 2005-06.

On the ground, Penny and Kathy have contributed to the longevity and sustainability of the program by mobilizing hundreds of volunteers to support the pedestrian and bike safety education to more than 4,500 K-3, 5th and 6th grade students. While many communities rely on paid staff to lead district and countywide Walk and Roll events, Palo Alto’s spring and fall Safe Routes to School encouragement events are almost entirely volunteer based.

Penny’s mantra that “we are the traffic” has helped build a constituency of parents to ensure that local government officials are accountable to achieving Safe Routes to School program goals—especially at times when budget cuts threatened to eliminate crossing guard funding or enforcement reductions. “The leadership of community volunteers like Kathy and Penny has put Palo Alto on the forefront of the nation’s Safe Routes to School programs,” says Joshuah Mello, Palo Alto’s Chief Transportation Official.

Following in Kathy’s footsteps, Penny’s youngest daughter will soon go off to college, meaning that she will be retiring from her work with the PTA after 14 years. Like Kathy, she will pass the reins to new leadership. Penny and Kathy are excited to see what direction the next generation of parent volunteers will take the program in. New PTA Safe Routes to School leadership is quietly emerging in the form of a team—“like that first team that Kathy worked with,” Penny points out.

“Together that first team created the catalyst for one of the nation’s most successful Safe Route to School programs. Kathy taught me the importance of using a grassroots network to provide political support for the creation of a local policy framework for Safe Routes to School and for a robust commitment by the City and school district to a collaborative partnership. Today we have strong volunteer teams with the knowledge to take this program to the next level. I think we are all proud of that accomplishment.”

The Safe Routes Partnership is grateful to Kathy Durham, Penny Ellson and the many Palo Alto PTA volunteers for showing us what a powerful team of parents can do to ignite their local Safe Routes to School movement, inspire the nation, and serve as a testing ground for making Safe Routes to School one of the great public health and transportation programs of the 21st century.