This guest blog post was written by Celia Preble-Gaitz of Living Streets Alliance.

A major street transformation dream became a reality when Living Streets Alliance (LSA) received a $20,000 KaBOOM! Play Everywhere Challenge Grant to create a fun, playful, and inviting walking corridor at a local Tucson elementary school. After two years of encouraging a walking and biking culture at Pueblo Gardens PreK-8, Vanessa Cascio (LSA Community Liaison) and Principal Seth Aleshire saw the need to make the streets around Pueblo Gardens Elementary safer and more beautiful for the students, their families, and the community. Once LSA was announced as one of fifty winning applicants out of 1,000 proposals, staff and community members jumped into planning to get the project rolling, especially since there was a quick turnaround period. Vanessa and Seth worked to get as many people not only on board, but also involved including Porter McDonald (neighborhood artist), Luis Herrera (neighborhood advocate), the Pueblo Gardens Neighborhood Association, Trees for Tucson, Serve Tucson (volunteer organization), city officials, and the school community. 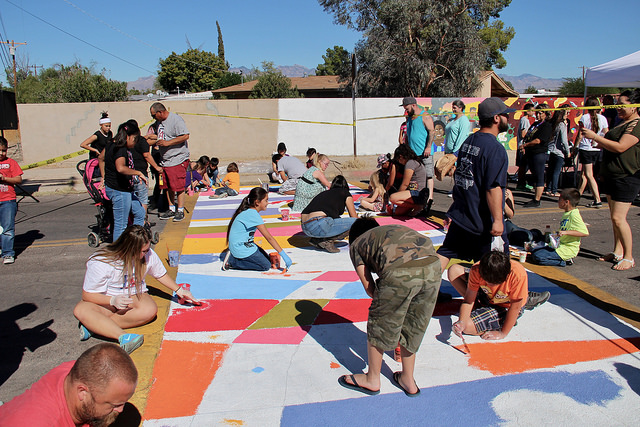 Porter led the designing and painting of a huge mural that went up on a wall right next to the school crosswalk along Menor Stravenue, a popular walking route for the students. It brought color and life to a dull tan wall. Middle school students interviewed elders and old-time neighborhood residents to inform the story told in the mural. Two elementary school students won a contest to have their radial art designs turned into intersection murals. The LSA team designed a playful path and other playful structures (such as animals made of tire and a music wall) along the sidewalk. Preparations were also made to revamp the school crosswalk with bright colors and repaint a bus stop that was last painted in 1995! LSA staff including Evren Sonmez (Program Coordinator), Emily Yetman (Executive Director), and Celia Preble-Gaitz (Safe Routes to School Outreach Coordinator) completed research about designs, identified supplies needed, and secured donations from local businesses to supplement the grant funds. They reached out to organizations in other cities, local businesses, and individuals for information on how to make this beautification and safety project successful and long lasting. All of this planning from early September to early November led to a huge community work day and block party - Fiesta en la Calle - during the second Saturday of November. 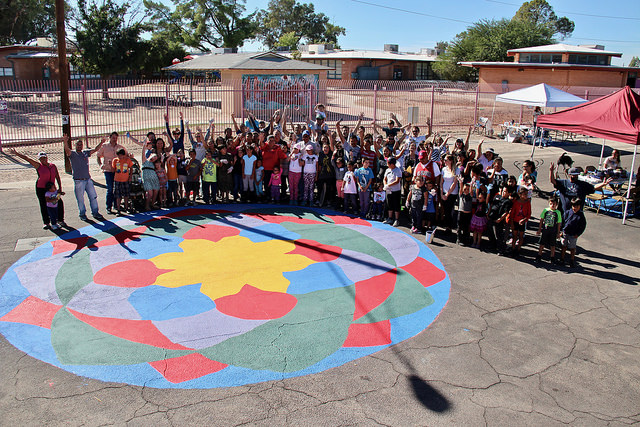 In the weeks just before the block party, LSA unfortunately faced some challenges getting the project approved through the City of Tucson, which almost halted this community-backed project. Since projects of this nature are not common in Tucson, LSA discovered that there wasn’t a well-defined and easy-to-navigate process. The bureaucratic hurdles threatened the tight project timeline. However, when City staff learned more about this project, they were supportive of the efforts and helped us expedite the process. Then the work day and block party arrived! Over 300 students, family members, school staff, neighbors, community members, and volunteers attended throughout the day of the party. It was a major success! We received donations for food, beverages, bands played, we received art supplies, and purchased other needed materials. We degreased, scrubbed, outlined, marked, and painted the street murals, crosswalk, and sidewalk. Porter added the finishing touches to his mural which he had been working on with a team made of his current and former students.

While the intent of the project was to create a safer, more playful and inviting space for kids, the project process was even more valuable than the outcome. Playful Gardens became an act of love by neighbors and a testament to the power of collaboration, as everyone could be part of creating this beautiful space for their neighborhood. As one father said, "It was a beautiful day. It taught my son how to live together with his community."

Josie Moreno, neighborhood resident and parent said, “I believe that the block party was just an introduction to a lot of children having better self-esteem, especially the bright colors that have been introduced and the participation. Just walking to school every day, my boys were talking about it saying that they’re glad that when they’re grown they can pass by and know that they were part of this.”

To celebrate the installation, Vanessa set up a ribbon cutting ceremony at the school, just before Thanksgiving. Mayor Jonathan Rothschild, Councilmember Richard Fimbres, and Pima County Supervisor Ramón Valadez all attended as special guests. Councilmember Fimbres presented certificates to key players that made this project possible, the school choir performed, and local news media documented the event. LSA staff returned in the weeks after the party to survey students and parents to collect their thoughts about the project. Many students were so thankful that this project was brought to their school; they enjoyed the colors it added to the neighborhood, and the fact that everyone in the community was invited to be a part of it. This project is a unique example of how to truly highlight the community, culture, and history of a neighborhood all the while making it a safer, more beautiful place to live in and visit.

Want to explore more ideas for engaging youth in innovative and effective walking and bicycling programs? Join our free webinar on March 29 at 2pm ET with speakers from the Living Streets Alliance, Cascade Bicycle Club, and Bicycle Alliance of Minnesota. More information here.