The majority of Americans live in urban or suburban areas, though around 15 percent of Americans live in nonmetropolitan regions, which make up 72 percent of US land. Although the proportion of Americans who are rural residents has recently declined, these communities still comprise 46.1 million Americans (USDA, 2015). When it comes to health outcomes, researchers have identified inequities in rural areas, including higher rates of obesity compared with urban residents and differing levels of physical activity by geographic region (Yousefian et al., 2009; Hansen and Harley, 2015). 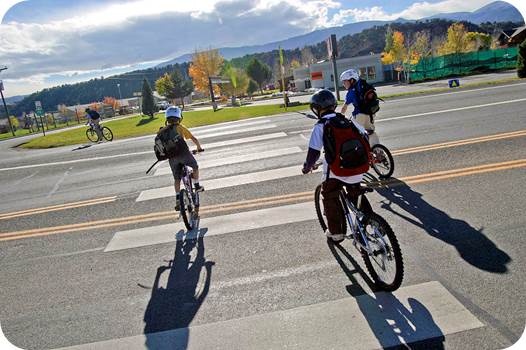 Concepts of walkability and neighborhood do apply to rural areas, but residents may define some characteristics differently than in urban and suburban areas (Kegler et al., 2015). For example, participants across four rural communities in a qualitative study using PhotoVoice identified specific barriers like lack of sidewalks or shoulders, heavy commercial truck traffic, unpaved roads, and lack of indoor recreational centers (Hennessy et al., 2010). Rural schools have also been found to be 73 percent less likely to implement a WSB program than urban schools (Turner et al., 2013). Longer commute distance is a key factor that must be addressed by context-specific strategies (Dalton et al., 2011).

This year, several key advocates have acknowledged different needs and context-sensitive strategies for supporting physical activity and active transportation in rural settings by publishing new resources for these communities.

The Safe Routes Partnership published a series of three fact sheets (1, 2, 3) that include case studies for overcoming challenges to supporting active transportation and implementing Safe Routes to School programs specifically.

Active Living Research published a research brief on active living in rural communities that includes a list of tools well-suited for assessing the built environment and walkability in rural areas.

Do you have more resources or a success story to share? Contact us to join the conversation about how to support active transportation and physical activity across rural and urban settings and help us show what Safe Routes to School can look like in rural communities.